Chilly and Wet November in the Books 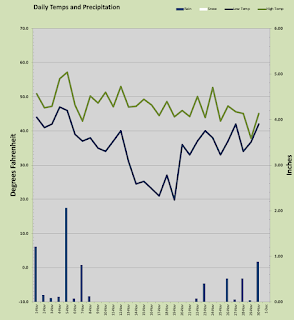 After last month's record heat one might expect a warmer than average followup yet this past month was much cooler than my 21 year rolling average and it was nearly as cold as October was hot relative to "normal." November delivered near normal precipitation and temps that were on average 3.5º cooler overnight and about 3.5º cooler by day as well than my 21 year normal. Five daily records were broken all cold records four overnight lows and one daily cold high. The all time monthly record for cold either overnight or daytime was not challenged, not even close in fact.

The warmest day last month was 57.2º on the 5th with very heavy rain coming down. The warmest overnight low of 47º came on the 4th with a wet system on approach. The coldest overnight low arrived the morning of the 19th when my thermometer reported 19.8º under clear skies. The coldest daytime high was 37.8º on the 29th under mixed precipitation. That was not a daily record cold high. Records broken for the month were all local daily records from my 21 years here. They were morning lows of 31º, 24.5º, 21º, and 19.8º on the 13th, 14th, 17th, and 19th of the month. None of these cold temps was close to challenging my all time November low of 13.8º back in 2010. The daily record cold high was not that chilly but it came early in the month on the 7th with a 42.9º mark. Overall November delivered seven days with subfreezing temps, one day under 20º, and five others in the 20s. Every day but one managed to get above 40º in the afternoon, and eight days made it to the 50s.

Precipitation ran close to normal with my number shy by less than an inch of my 21 year normal. 7.06 inches fell almost all of it as rain but a little wintry mix as well. There was no sticking snow at my house. Sticking snow was found as low as 500 feet above sea level. The wettest day came on the 5th with an all day deluge of 2.06 inches. That was one of two days exceeding an inch and seven days that exceeded 0.25 inch. All told 14 days with precipitation against nine sunny days. Nine sunny days in November is actually pretty damn good :)

It seems like we are headed towards another cooler than average month but one never knows what the weather will decide to do. I would expect some sticking snow down to sea level at some point in the next few weeks.

Warmest October I have yet Recorded 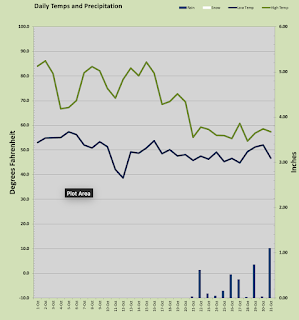 You read that right friends. This October was a scorcher, well for October at least. I set more warm daily records than ever before in any month and this is my 21st October keeping temperature records at this location. 13 daily high records fell for this location and two warm morning low records as well. That is nuts. It gets nuttier because I also recorded my warmest temperature ever for October. Generally in October we get a couple of warm days in the upper seventies of maybe an 80º temp almost always in the first 10 days of the month. Then the rain train arrives and that's the end of that. Not this year, we had a proper Indian Summer with three weeks of warm weather mostly in the 70's and 80's. The end of the month was more like a regular October with rain and cool temps.

So what's all this fuss about? Here it is: October, 2022 featured the aforementioned 13 daily record highs, 2 warm low daily records, and the warmest October temperature on record at this location. All of this scattered among just 9 sunny days, 8 rainy days, and the rest were cloudy or foggy or partly cloudy. There were ten days in the 80s, and 12 in the 70s. The month was so warm we didn't get anywhere near freezing all month long with the coldest temp coming on the 12th at 38.7º and I had nary a frost. The the warmest temp of the month, my all time high for October was on the 2nd with 86.1º under brilliant sunshine nudging past the previous all time October high of 83.8º and 6º higher than the previous record for the day. The other daily records were as follows, 84.0º on the 1st which was an all-time October high for me for one day until broken on the 2nd, 81.0º on the third, 81.3º, 83.8º, 82.1º, and 75º on consecutive days the 7th through 10th, followed by 5 consecutive daily highs on the 12th through 16th with marks of 78.6º, 83.2º, 80.1º, 85.6º (8.8º above the previous daily record), and 81.2º. But we were not done yet breaking daily records, on the 20th a mark of 69.6º was enough to take the record. All in all this past October had four daily highs that were enough to tie or break the pre-2022 all time monthly record! We even added two daily records for warmest overnight low done on consecutive nights on the 5th and 6th with marks of 57.4º and 56.3º respectively the latter was the warmest morning low for the month and the only morning under 40º with a reading of 38.7º on the 12th.

God didn't;t turn on the water spigot till the last week of the month and we got all of the month's rain in a 9 day period from the 22nd to the 31st with a sum total of 3.78 inches which is almost a normal October month of rain. All in the last 9 days. 1.1 inches on Halloween capped it off. 5 days over a 1/4 inch and 3 days over a 1/2 inch or rain.

This week has a very seasonable forecast with snow levels dropping down to the lower foothills later in the week then rebounding back above pass levels but not a single warm day in the outlook. We will likely get out first frost of the year this week and highs will remain in the 40s most of the week. Now that's November :)

Soak it up my friends, soak it up.