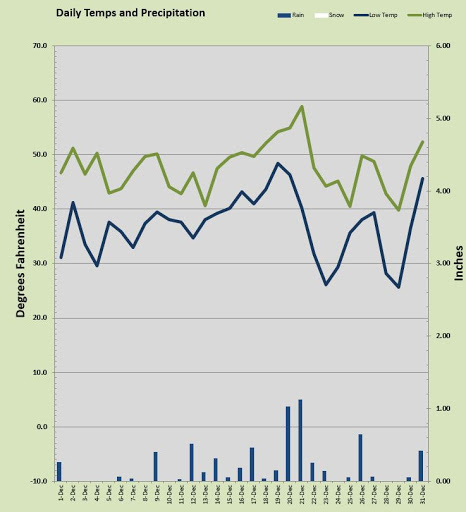 Another year is in the books, this past one won't be missed much. Weather wise it was business as usual with a couple of twists. before the year end summary here's a look at the final month of 2020.

December was warm and wet, but not as wet as normal. The temps were definitely on the Northern California warm side with a monthly observed average low of 36.94° nearly 4° warmer than my 19 year average and the observed highs a toasty average of 47.68° also about 4° warmer than my average. Yikes more like November! The coldest temp was a nippy 25.6° on the morning of the 29th which was one of only seven sub-freezing days all month. The warmest day was a mark of 58.8° on the 21st which is a daily record for me. Locally the NWS observed a 61° mark that day at the airport also a record. The coldest daytime high a rather typical 39.8° on the 29th under foggy conditions. The warmest overnight low was a balmy 48.4° on the 19th which was another record for me locally, the NWS reported a 51° that night at the airport. The month yielded only nine days with lows under 40° and that is just CRAZY! There were also nine days with highs in the 50s which is pretty nutty for December.

With those warm autumn like temps it should come as no surprise that nary a snowflake was seen last month. Not so much as a flurry. Rain came heavy at times but not enough to hit the average. I saw 6.34 inches measured against my 'normal' of 8.02 inches. There were 10 days with a 1/4 inch or more and two days with more than one inch. December had 19 rainy days and 4 sunny days which is actually pretty typical. The wettest day was the 21st which was the second day in a row over one inch with 1.12 inch falling.

Looking at the annual numbers for 2020 nothing really bizarre to see. Although snowfall is measured on a seasonal basis the colander year total was sup par at 4.84 inches all of which fell in the first half of 2020. The hottest day of the year was 97.2° on the 26th of July that was also a local daily record at my station. This was the third year in a row that I failed to record a triple digit temp. The NWS reported an over 100° mark however at the airport that day. The coldest temp was rather oddly last month despite its warm characteristics no low temp in 2020 was colder than the 25.6° on December 29th. Perhaps 2020 was a warm year? I think it was actually. Only 30 days saw subfreezing low temps which is about half of a typical year. There was nary a single day under 20° and every single day in 2020 managed to get above freezing. I got 40.15 inches of rain which is about 80% of my local 'normal' and that aligns with other reports in the area. I had 146 days with precipitation of which 62 had more than a quarter inch. There were 96 sunny days which is low even for us since I count 'mostly sunny' as 'sunny'. We had 194 days with a high temp at 60° or more. So how was 2020 as far as record warmth... well I observed the highest average low temp of any year in the last 19 years. But the average observed daily high was in the bottom half of those years so the mean temp in 2020 was pretty average overall. There just wasn't any real weather events aside from a strong wind storm that caused damage and managed to enrage a few wildfires and cause dangerous air quality in September.

So 2021 is starting off like December ended, warm and wet. This just might be one of those winter seasons that produces no sticking snow. I haven't had one of those since the winter of 2004-05. Take a look at the charts below. 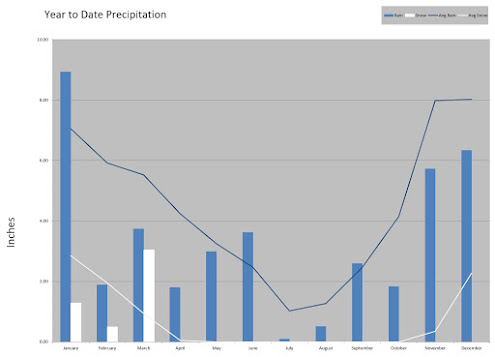 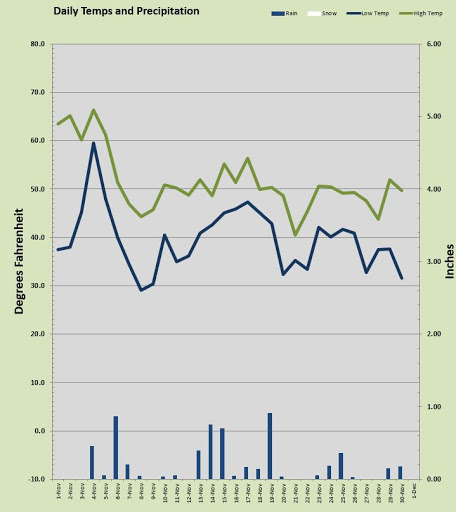 November is done and December is here. Although the "official" start of winter occurs later in the month on the solstice, the real winter tends to start now. After all the next three weeks have shorter days than the last week of January on through spring. December tends to be our coldest month round these parts as well. So, winter is here, sort of. Temps have been seasonally chilly lately and so winter feels like it is ready for action. Let's take a peek at November's stats.

November was a pretty average month, rainfall was plentiful as should be in November but a tad short of my average for the month. No measurable snowfall was observed at my location. Temps were also pretty standard fare for November with the exception of a rather toasty day early in the month. On the 4th I recorded a 66.3° mark and a few stations in the area tickled 70° which is rather warm for the 11th month. The warmest temp was that 66.3° mark one of five days that breeched the 60 degree barrier. The coolest was a seasonally crisp 29.1° on the morning of the 8th, one three days under the freezing mark. The coolest afternoon high came on the 21st when the merc barely topped 40 degrees with a 40.5° reading. The warmest overnight temp arrived on the 4th with a summerish 59.5° bottom. November delivered 18 rainy days and just a pair of sunny ones. The wettest day was a 0.91 inch event on the 19th. The whole month saw 5.73 inches of rain. 7 days had more than 1/4 inch. 14 days failed to reach 50° but every day managed to get above 40° so it was a pretty unspectacular month overall.

December started off with nice sunshine and crisp but not cold temps and a bit of an east wind to add some bite to the air. The last month of 2020, will it go out with a wimper or a roar?

Soak it up my friends, soak it up.

Conditions at my station 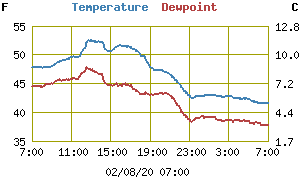